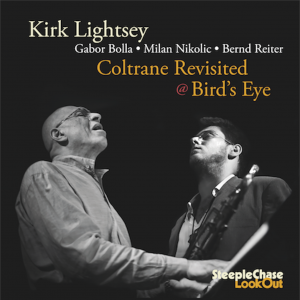 The title of Coltrane Revisited is a bit of a misnomer. Pianist Kirk Lightsey leads a European quartet (on a live date in Switzerland) through two Trane compositions; “Soultrane,” Tadd Dameron’s feature for the sax legend; two standards he covered on an obscure 1959 date; and “Habiba,” Lightsey’s own signature tune. More to the point, it’s the piano, not Gabor Solla’s tenor, that holds most of the album’s excitement.

Solla, a Hungarian jazz star, is not an unadmirable saxophonist. He actually channels Trane quite a bit, even quoting “Moment’s Notice” on the opening “My Shining Hour.” Moreover, he builds to a delicious frenzy on “Habiba.” However, he simply never achieves the distinction of, say, Lightsey’s collisions of lyricism and chords on “Like Sonny” or “You Say You Care.” What’s more, Solla’s brittle tone does him ill on the ballad “Soultrane,” coarsening the affair, whereas Lightsey goes light and luminous.

As it happens, Solla isn’t even the second most interesting player on the record. Austrian drummer Bernd Reiter has several marathon solos of his own — undoubtedly reaching his acme on the closing “Pursuance” — where he clatters through undulating rhythms that both nod to and steer away from Elvin Jones. He also makes fascinating choices as an accompanist: “You Say You Care,” done at a fast tempo that makes it sound suspiciously like Ellington’s “Cotton Tail,” features rhythmic change-ups that could steamroll a lesser pianist. That Lightsey handles them with ease is further evidence that this is a Lightsey record through-and-through. Don’t come into it looking for a Coltrane tribute.