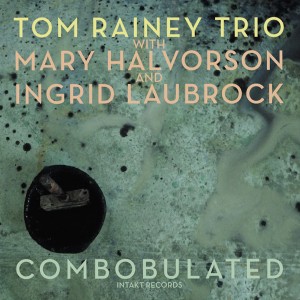 Versatile enough to swing with pianist Fred Hersch and propel the long marches of saxophonist Tim Berne, drummer Tom Rainey remained a consummate accompanist for the first three decades of his career. Then in 2010, the Tom Rainey Trio debuted with Pool School.

Combobulated is Rainey’s sixth record as a leader and fourth with this trio, which includes saxophonist Ingrid Laubrock and guitarist Mary Halvorson. While his Obligato ensemble plays standards, including “Stella By Starlight” and “What Is This Thing Called Love?,” the trio adheres to a very specific M.O. Everything is freely improvised, but played so cohesively that whether it’s improvised or composed is beside the point. The players forge into the heat of invention on the album’s title track, with Laubrock essaying substantial, melancholy phrases over Halvorson’s liquid tones as Rainey tends a slow-boiling pot of rhythmic possibilities. Over the course of 18 minutes, the improvisation morphs organically from vigorous rhythmic excavation to slowly winding melody and into effects-refracted space music, all united by a persistently cultivated tension that keeps the listener invested.

In the past year, Rainey’s accompanists have made bold and possibly career-transforming statements. Combobulated might lack the formal ambition of Laubrock’s orchestral Contemporary Chaos Practices or Halvorson’s song cycle, Code Girl, but demonstrates that closely attuned free-improv can be just as satisfying.