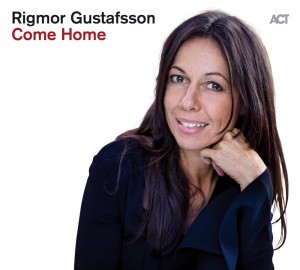 Come Home marks Swedish jazz vocalist Rigmor Gustafsson’s return to the studio after a four-year hiatus. Working with a cadre of longtime lyricists, she funnels a deluge of new songs into a creative reservoir edged by the fabulous trio of Jonas Östholm on piano, Martin Höper on bass, and Chris Montgomery on drums.

Behind Gustafsson’s technical prowess beats a troubadour’s heart. Songs like “I Think Of You” and “Take A Little Turn” crosshatch sly chord changes with unfiltered cadences and find her adapting to various subject matter with ease. Her band is equally responsive, softening her urgencies and heightening her melancholies. Guest harpist Margareta Bengtsson adds sparkle to “The Light Years,” one of the album’s strongest turns, while Östholm’s pianism draws a bold underline from start to finish. Much of the lyrical content plays with time, as over the gorgeous colorations of Höper and Montgomery on “Winter Doesn’t End” and “Enjoy The Day.”

Whether in the upbeat bossa nova of “Lovely” or the anthemic title track, Gustafsson handles moods with distinct personality, especially on the set’s lovingly arranged covers. Both Joni Mitchell’s “Big Yellow Taxi” and Kate Bush’s “Wuthering Heights” highlight Gustafsson’s talent for simultaneously mimicking her source and being herself, but nowhere so deeply as on “Twist In My Sobriety,” which turns Tanita Tikaram’s classic into a plush groove. Featuring the accordion of Lisa Långbacka, it pays tribute to an era not so much bygone as buried under our current malaise.