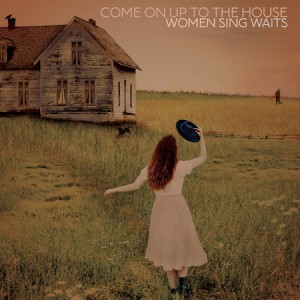 A transcendent tribute album illuminates the artistry of the honoree, as well as that of the participating performers. Rocker Warren Zanes is to be applauded enthusiastically for producing Come On Up To The House: Women Sing Waits, as is Dualtone CEO Scott Robinson, who conceptualized the project. This disc brilliantly presents a dozen Tom Waits ballads in Americana settings. In place of Waits’ gruff, guttural (yet charming) singing are lead vocals from female artists whose styles are far more accessible. These tunes are finely crafted gems, not rowdy barn burners.

The press release for this album describes Waits’ persona as being “equal parts bard, balladeer, Beat poet, barfly, carnival barker and smoky lounge singer.” That is one way to view him. But this album’s pristine performances shine a spotlight on an oft-overlooked aspect of Waits’ personality: Though frequently regarded as an eccentric actor and junkyard howler, Waits is also a sophisticated tunesmith whose melodies can benefit from a singer with a broad vocal range.

Waits’ album discography stretches from 1973 to 2011, but five of the tunes on Come On Up To The House are from a single source—his Grammy-winning, 1999 disc, Mule Variations. Waits cowrote most of the tracks on that album with Kathleen Brennan, whom he wed in 1980.

No fan of Mule Variations should hesitate to seek out this tribute disc. Portland band Joseph (a trio of sisters) sets the tone with the opener/title track, giving Americana fans a rich slice of manna. Australian singer-songwriter Angie McMahon delivers a delicate version of “Take It With Me,” Arkansas folkie Iris DeMent unleashes her poignant vibrato on a pedal-steel-fueled “House Where Nobody Lives” and Los Angeles native Phoebe Bridgers sculpts a sad, cinematic “Georgia Lee.” Aimee Mann’s rendition of “Hold On” conveys the type of palpable emotional investment that can arise when one great songwriter interprets the work of another.

Sibling vocal harmony is the key ingredient of Shelby Lynne and Allison Moorer’s strings-laden, countrypolitan rendition of “Ol ’55” (popularized by The Eagles). British r&b singer Corinne Bailey Rae—who is akin to a great character actor, in that she can elevate any production in which she participates—offers a soulful rendition of “Jersey Girl” (popularized by Bruce Springsteen). Other artists appearing on the album include Rosanne Cash (“Time”), Courtney Marie Andrews (“Downtown Train”) and Kat Edmonson (“You Can Never Hold Back Spring”).

Zanes’ production results in an album that is polished and even radio-friendly, without being overly glossy. Compositions like “Time” and “Georgia Lee” can stand on their own as poetry on the page, with plenty of music and rhythms inherent in the carefully selected words.