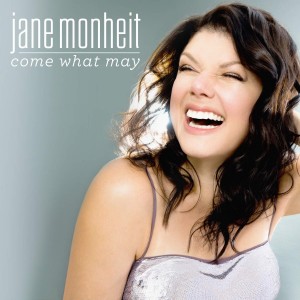 Jane Monheit is a potent antidote to a certain brand of jazz snobbery. At every major jazz festival, there are fans who will begrudgingly (or cheerfully) witness a set by Cécile McLorin Salvant or Gregory Porter, but if pressed, they would assert that they don’t consider vocalists to be in the same league as instrumentalists. (Was Ella Fitzgerald as good a musician as Count Basie? Debate that over a Zoom chat sometime.)

When the luminous Monheit arrived on the scene 20 years ago with her debut, Never Never Land, she won over fans via renditions of standards such as “My Foolish Heart,” “I Got It Bad (And That Ain’t Good)” and Jobim’s “Dindi.”

On her latest album, Come What May, Monheit continues to dazzle, delivering a program chockfull of standards, such as “Lush Life,” “Let’s Face The Music And Dance” and Jobim’s “Samba Do Aviгo.”

Monheit’s version of Frank Loesser’s “I Believe In You” is delicately spiced with segments of scatting that elevate the tune—just a pinch of salt that works wonderfully. Throughout the program, it should be clear to any snobbish naysayer that her instrument is equal to that of her band’s, which includes guitarist Miles Okazaki, bassist David Robaire, pianist Michael Kanan, drummer Rick Montalbano and percussionist Kevin Winard.

In the opening section of “My Funny Valentine,” while floating atop Kanan’s lines, Monheit’s breath control and exquisite elongation of vowel sounds are so intoxicating that some listeners won’t even pause to ponder the arcane lyrics: “Thy vacant brow, and thy tousled hair/ Conceal thy good intent/ Thou noble, upright, truthful, sincere/ And slightly dopey gent.”

The inclusion of “Let’s Take A Walk Around The Block” (penned by Harold Arlen, Ira Gershwin and E.Y. Harburg) seems suited to our pandemic era in a particularly bittersweet way. Similarly, an elegant reading of “The Nearness Of You” might resonate on multiple levels for lovers who still share a spark, despite being stuck in a small apartment for the past 11 months. On the latter tune, the combination of Monheit’s emotive, wordless flights and Wayne Haun’s lush orchestral arrangement is positively intoxicating.

Monheit’s album-release show at Feinstein’s at Vitello’s will be livestreamed on March 12. Catching this virtual gig might not be as fun as hearing her vocals reverberate around a jazz club or a festival crowd, but that will come, hopefully soon.