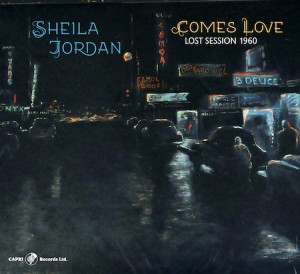 Sheila Jordan has long been a beloved singer, educator and interpreter of song, who recently touring Europe at the age of 92.

She sang in Detroit in the late 1940s, moved to New York in 1951, was a friend of her mentor Charlie Parker, was married to Duke Jordan during 1952–’62, recorded “Yesterdays” with Peter Ind in November 1960, waxed a haunting version of “You Are My Sunshine” with George Russell and made what was believed to be her first album as a leader, Portrait Of Sheila, for Blue Note in 1962.

Yet, despite all of that, she would not become a full-time jazz singer until the 1970s.

However her history now has to be amended a little. Comes Love, which is subtitled “Lost Session 1960,” unearths a long forgotten and unheard session from June 10, 1960, that is Jordan’s true recorded debut.

Joined by an unidentified rhythm section (possibly led by pianist John Knapp), the 31-year old Jordan shows that she was already a top-notch vocalist although not yet that recognizable. Performances such as the slow ballad “I’m The Girl” and her scat-filed “It Don’t Mean A Thing” would be perfect for a Blindfold Test.

Jordan sounds closer to herself on a pair of Billie Holiday-associated songs (“Comes Love” and a magnificent version of “Don’t Explain”), as well as her reshaping of “A Sleeping Bee” and her passionate take on a very slow “When The World Was Young.”

Her voice is a little higher than the one audiences came to know later in her career, but Jordan already had something personal and special to contribute to these standards, making the 61-year-old Comes Love an important discovery.

Comes Love: Lost Session 1960: I’m The Girl; It Don’t Mean A Thing If It Ain’t Got That Swing; Ballad Of The Sad Young Men; Comes Love; Don’t Explain; A Sleeping Bee; When the World Was Young; I’ll Take Romance; These Foolish Things; Glad To Be Unhappy; They Can’t Take That Away From Me. (34:17)
Personnel: Sheila Jordan, vocals; unidentified piano, bass, drums.
Ordering Info: caprirecords.com