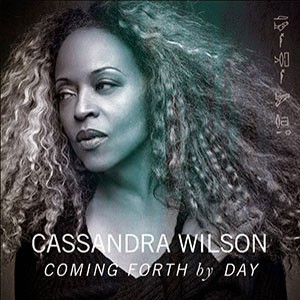 Vocalist Cassandra Wilson avoided a predictable approach for Coming Forth By Day. This disc, which includes 11 songs recorded by Billie Holiday, functions as an admirable tribute, but it doesn’t sound like Lady Day. Wilson employs her own husky, occasionally hushed singing style, not attempting to re-create Holiday’s famous vocal inflections—and certainly not copying her arrangements. Instead, Wilson assembled a stellar, “outside the box” ensemble to interpret this material for a new generation of listeners. Her eclectic cast of collaborators includes producer Nick Launay (celebrated for his work with alt-rockers Nick Cave & The Bad Seeds), guitarist T Bone Burnett (who helped Diana Krall incorporate Americana sounds into her 2012 album,Glad Rag Doll) and drummer Thomas Wydler and bassist Martyn P. Casey of The Bad Seeds. Van Dyke Parks—famous for his work with rock acts such as Brian Wilson and U2—wrote intricate string arrangements that bolster Wilson’s voice without diluting its power. Holiday’s hit version of “The Way You Look Tonight” in 1936 was a chipper swing number. In contrast, Wilson slows down the tempo for her version, Parks provides a lush cushion of strings, and Robby Marshall’s clarinet adds a somber tone. Wilson and her team also offer an unusual arrangement of the anti-lynching song “Strange Fruit,” one of the most harrowing compositions of the 20th century. Wilson’s interpretation has layered digital effects, ominous bass notes and cascading, chaotic strings, all of which reinforce the sense of violence and injustice conveyed by the unforgettable lyrics. The album concludes with Wilson’s original composition “Last Song,” in which she imagines a final message from Holiday to her recently deceased lover, Lester Young. Wilson delivers the lyrics with obvious, tremendous respect. But thankfully, on this remarkable album, Wilson’s reverence for an icon didn’t prevent her from using Holiday’s music as a point of departure, rather than a static template.