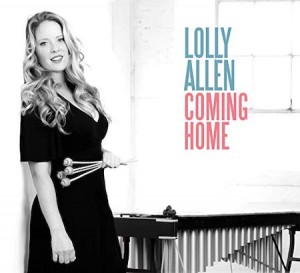 In recent years, among the vibraphonists who have raised their profiles as bandleaders are Joel Ross, Behn Gillece and Matt Moran. Joining their ranks is Los Angeles-based Lolly Allen, whose cohesive new album, Coming Home, features two original compositions, along with interpretations of songs by Johnny Mandel (“Emily”), Mario Bauza (“Mambo Inn”) and Antônio Carlos Jobim (“O Grande Amor”). For this project, Allen teamed up with a couple of rising stars: Danny Janklow, who contributed alto and tenor saxophone throughout the program, and pianist Josh Nelson, who played on about half the tracks, served as assistant producer for the recording and wrote an essay for the liner notes. Allen also recruited some jazz veterans for the sessions, including guitarist Larry Koonse and drummer Paul Kreibich.

The program opens with a joyous, swinging version of Horace Silver’s “The Hippest Cat In Hollywood,” and it closes with a quintet rendition of Dizzy Gillespie’s “Bebop” that features delightful, rapid-fire exchanges among band members. Elsewhere, Allen’s luminous tone permeates her lovely arrangement of Tadd Dameron’s “If You Could See Me Now.” A reading of Luiz Bonfá’s “Gentle Rain” features drummer Kendall Kay’s light rhythmic touch—evoking the precipitation of the title—as well as a mesmerizing solo from Allen.

With the satisfying musical journey presented on Coming Home, the young vibraphonist has become a rising bandleader to watch.