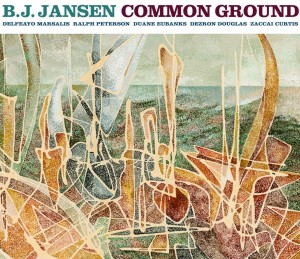 For his 10th recording as a leader, baritone saxophonist B.J. Jansen is joined on the front line by trombonist Delfeayo Marsalis and trumpeter Duane Eubanks. (The Cincinnati native was introduced to both veterans when he was in school—the former while an undergraduate at the University of Louisville’s School of Music and the latter during his time earning his MBA in Music Management at William Paterson University.) Pianist Zaccai Curtis (of the Curtis Brothers), bassist Dezron Douglas and drummer Ralph Peterson round out the impressive lineup.

Aside from the pedigree of the band, what stands out after repeated listening is the discernable camaraderie among the six musicians and the engaging repertoire. In addition to five of the session leader’s own compositions, Common Ground features a pair by pianist Frank Stagnitta (Jansen’s mentor), one by Jansen and the rhythm section (the A Love Supreme-inspired title track) and a take on Philadelphia keyboardist Trudy Pitts’ “Bucket Full Of Soul,” from her 1968 Prestige album of the same name.

As explained in the liner notes, many of Jansen’s pieces are inspired by or dedicated to specific individuals: Written for a friend, the blues workout “Stacey’s Pace” opens the album; brief solos by Douglas and Eubanks precede the bandleader’s extended exploration.

“Soul Loss,” dedicated to recently passed love ones, sounds at once like an elegy and a long-lost standard with the quartet track showcasing Jansen’s reflective playing. “Relaxin’ With Jessica” is a group romp that Jansen says was inspired by the musical styles emanating out of Philadelphia in the 1950s and ’60s.

A practice typically reserved for reissues, Common Ground offers three alternative takes at the end of the album. Second spins through “Angela’s Aggravation” and “Stacey’s Pace” are exciting, but the sextet’s approach to “Bucket Full Of Soul” is so smile-inducing (with Marsalis’ unbuttoned shirt/loosened necktie-style solos particular highlights) that it definitely supports the “more is more” philosophy when it come to multiple versions.