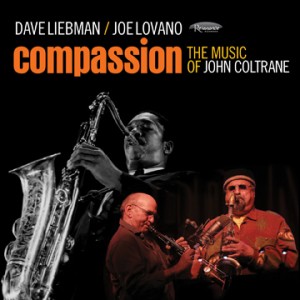 Recorded a decade ago for a BBC broadcast commemorating the 40th anniversary of John Coltrane’s death—and released commercially in time to mark the 50th—Compassion is a major gift for Coltrane enthusiasts. Dave Liebman, who put the session together, is a long-time Coltrane acolyte who, in addition to having recorded solo tributes, had assembled the Coltrane-focussed ensemble Saxophone Summit, whose membership included not only reedman Joe Lovano but also this album’s pianist and drummer, Phil Markowitz and Billy Hart. Even better, the all-Coltrane set list runs the gamut of Coltrane’s output, from early work like “Locomotion” to transcendent later fare like the title track.

But as much as these five draw from the Coltrane legacy, what emerges here is less a collection of licks learned than a lesson in how to take Trane’s compositional and improvisational approaches and use them to create something utterly fresh and personal. Take “Olé,” for example. Coltrane’s recording was sprawling, exotic and adventurous, with a rhythmic intensity that makes this version seem a bit tame. Listen closely, though, and you’ll notice that there’s more variety in Hart’s pulse, just as the Ravelian harmony Markowitz slips into his piano solo suggests broader harmonic possibilities than the original’s fierce modality. It’s work like this that reaffirms Coltrane’s enduring influence.