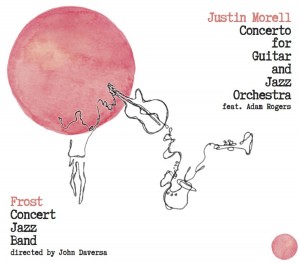 It is a rare, beautiful thing when a friend from one’s childhood remains a friend into adulthood. Justin Morell, a guitarist who teaches at Lebanon Valley College in Pennsylvania, and John Daversa, a trumpeter who teaches at the University of Miami’s Frost School of Music, grew up playing music together. Now, they have collaborated on a splendid new album that melds classical, jazz and Brazilian rhythmic influences: Concerto For Guitar And Jazz Orchestra.

Morell composed and arranged all the music in the three-movement suite, but does not play on the recording, instead recruiting jazz guitarist Adam Rogers as the featured soloist. Daversa directs and conducts the 19 musicians in the Frost Concert Jazz Band. With diverse chops that allow him to navigate jazz, classical and improv territory with authority, Rogers delivers spidery guitar lines in the first movement, “Lost, Found And Lost,” putting his individual stamp on the material. However, this accessible concerto (which unfurls with fast, slow and fast movements) feels like one that could be performed gracefully by other orchestras and soloists. The second movement, “Life And Times,” has a solo guitar segment in which Rogers’ personality shines like a beacon. Throughout the program, the guitarist balances the intricacies of complex fretwork with the desire to forge an emotional connection with the listener. The 37-minute program showcases not only the athleticism of Rogers, but also of other players, including drummer Garrett Fracol, whose cymbal work is particularly compelling in the final movement, “Terraforming.” Although Morell and Daversa have deep roots in academia, they have teamed with the classically trained Rogers to craft a program that is just as suited for the concert stage as it is the classroom.