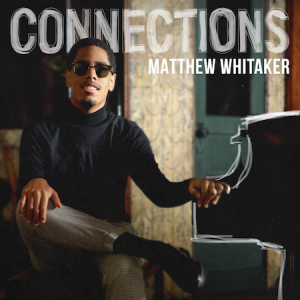 That 20-year-old pianist Matthew Whitaker is alive is a bit of a miracle. He was born prematurely and blind, given little chance of surviving with doctors saying that, even if he did, he probably would not be able to crawl, walk or speak. His story has been well-documented by shows like 60 Minutes. Whitaker can speak, and he speaks well. He can walk, and walk well. But what this prodigy can do better than anything else, and arguably anyone else, is play piano, organ and keyboards. Hear for yourself on Connections (Reliance Music Alliance), his third album, this one produced by bassist Derrick Hodge. It is astounding. We’ve been listening to Whitaker take our breath away with all of the promise he showed on the first two albums. This one takes him a full leap forward. The fleetness of finger, the touch and taste, the grit and grime when he needs it, the lightness and airiness when it’s called upon — Whitaker has it all. Beyond his playing chops, his compositions have taken a leap forward, also. In part, he credits Hodge for pushing him to be more adventurous and it shows on tunes like the uplifting opener “Journey Uptown”; the organ trio jam “A New Day,” where he and guitarist Marcos Robinson fly through unison lines; the pensive title track; and the sweet, humbling “Stop Fighting.” Whitaker also delivers some terrific takes on jazz classics. He and Jon Batiste go at it like kids in a sandbox on Thelonious Monk’s “Bye-Ya.” It’s a treat trying to figure out which musician is playing which part. The chuckle at the end of the song says it all: two amazing musicians simply having a good time with one of the greatest piano tunes in jazz. The same can be said for Whitaker and violinist Regina Carter swinging through Duke Ellington’s “Don’t Get Around Much Anymore.” Whitaker also does a crazy take on Chick Corea’s “Spain,” playing Hammond B-3 on the opening strains, then switching over to keyboards when the band kicks in. Then there’s a serious dance-a-thon awaiting with his Latin jazz take on Duke Pearson’s “Jeanine.” There’s plenty more, with 16 tracks in all, including “His Eye Is On The Sparrow,” a beautifully rendered spiritual where Whitiker shows deep roots. With bits of spoken word between songs to tell his story, Matthew Whitaker is an inspiration as a person and as an amazing young artist. It will be fascinating to see what the future brings.