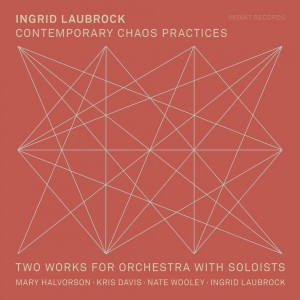 Four years ago, Wayne Shorter issued a sphinx-like definition of jazz as, “I dare you.” It came off as a call-to-action for musicians to muster the courage to embark on any artistic journey their imagination fancied. While there was no mandate that the exploration had to involve the avant-garde, it seemed implied, considering that at the time, the iconic saxophonist was investigating both the outer limits and internal networks of some of his cherished compositions and new works. Ingrid Laubrock’s wily Contemporary Chaos Practices embodies Shorter’s maxim in full, unapologetic effect.

Like Shorter, the German-born, New York-based Laubrock often is heard on tenor and soprano saxophone in self-created, envelope-pushing realms of music. But on this new album, she articulates her artistic voice not as a commanding instrumentalist, but as a composer with a wanton spirit. Her imagination manifests in unconventional orchestral wonder where diaphanous through-composed elements rub against intuitive improvisations, simultaneously led by two conductors: Taylor Ho Bynum and Eric Wubbels. Her conductors engage in Walter Thompson’s “soundpainting” system, which is like Butch Morris’ “conductions” in that it involves a sophisticated language of hand signals and gestures to shape the large-scale improvisations.

The three-track, four-part Contemporary Chaos Practices, written for the 2017 Moers Festival, occupies much of the disc. It blasts off like a cannonball, followed by streams of flaring horns. Very soon, Mary Halvorson offers a guitar solo marked by twisting lines that take on the logic of curling barbed wire and eventually disintegrate. The orchestra then unleashes a series of fidgety notes—swarming around like hornets—that give way to sustained chords zooming across a sonic landscape in such an evocative manner that it conveys a sense of suspenseful adventure.

Trumpeter Nate Wooley and pianist Kris Davis are the other two guest soloists here. Both superbly nestle inside Laubrock’s restive composition, which places high premiums on textual ingenuity, spatial awareness and wide dynamics. With its judicious use of dissonance and dramatic jolts, a sense of peril permeates throughout without ever letting up. And when Laubrock leans into an unaccompanied soprano saxophone solo, listeners can better glean why she’s regarded as one of the most audacious reed players of her generation. She imbues her swirling passages with equal amounts of subversive humor and steely determination.

Laubrock composed “Vogelfrei,” the disc’s concluding piece, for the second Jazz Composers Orchestra Institute Reading. Presented in 2013 by the American Composers Orchestra at Columbia University, it boasts a hermetic universe that sounds as if an entire new solar system is coming to life.

None of the music here is for the faint at heart, though. Like Shorter’s maxim, Laubrock’s intrepid orchestral works dare listeners to forgo any conventional comfort zones.