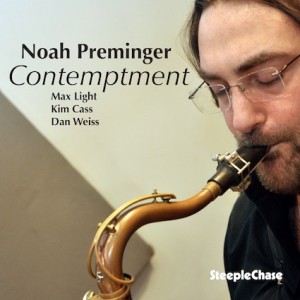 Tenor saxophonist Noah Preminger’s Contemptment is far and away his most composerly album, its seven originals full of byzantine structures, oddly shaped sections and more plot twists than General Hospital. Look no further than the many sections, tempos and meters of “Hygge,” its second track, for orientation. Try to settle into the groove and listen as the rug flies out from under you with a single bar of 7/4, played in half-time. Similar switcheroos come in the opening “The Late 90s” and “Hey J.”

Sophisticated as Preminger’s pieces are, it’s also the album’s major obstacle. The tunes just aren’t very memorable, in large part because they don’t sit still long enough to appreciate. “Hamburg” has a leitmotif—a chromatic descent—that might be the only enduring bit on the record, and that includes the stuff that surrounds it in the song. For the listener, it’s a lot of work.

There are payoffs, though. The quartet’s delicate take of the Red Hot Chili Peppers’ “Porcelain” has great beauty, with Preminger, guitarist Max Light and bassist Kim Cass showing uncommon sensitivity, and drummer Dan Weiss stunning with his concept of space. Ditto the more upbeat closer, “Promises Kept,” where even Preminger and Weiss pouring gas on the fire can’t crowd out the tune’s plainspoken lyricism and serenity. For that matter, even on the abstruse pieces, the players burn. Light (more a single-note-line player than a chordist) takes tour-de-force turns on “The Late 90s” and “Contemptment”; Cass has a startling, fleet-fingered feature on “Hamburg”; and both Preminger and Weiss address everything they encounter with prowess and passion. Alas, the territory they so deftly explore just isn’t friendly.