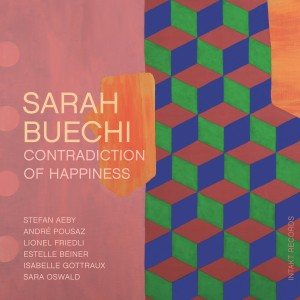 By the time Sarah Buechi, a vocalist and composer from Switzerland who also plays violin, entered college, she was most interested in focusing on singing and writing. For Contradiction Of Happiness, her third album for the Intakt imprint, Buechi employs the same rhythm section as on her earlier releases for the label, but adds a string trio. She arranged those string parts, and composed all of the lyrics and music for the album, except for the closer—a traditional Swiss folk song.

Buechi has an attractive voice and a wide range, although sometimes it’s difficult to know what she’s singing. Fortunately, her lyrics are included in the liner notes, and they reveal her to be a skilled, if often abstract, poet. Among the topics covered are the importance of fighting for one’s beliefs (“Child Of Our Times”), insecurity (“After We’ve Kissed”) and the necessity of living in the moment (“Here And Now”). While Buechi might reflect some folk-singer inclinations—with a tone sometimes reminiscent of Sheila Jordan—she also engages in wordless improvising and swings when it’s called for. The result is an intriguing set of unclassifiable music by a vocalist-composer with strong potential.