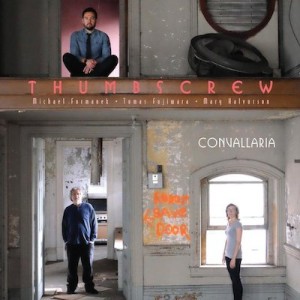 Thumbscrew’s superb second album, Convallaria, was prepared and recorded during a two-week residency at the City Of Asylum artists program in Pittsburgh during the summer of 2015. It arrives three years after their self-titled debut, which was also released on the Cuneiform label.

Thumbscrew—bassist Michael Formanek, guitarist Mary Halvorson and drummer Tomas Fujiwara—has a jazz trio vibration, but with delicate perversions, mostly provided by Halvorson’s guitar-sound choices. Most of this band’s wayward tendencies lie at her foot-pedaled feet. The phrases themselves often spring from the jazz tradition, but it’s the sonic surface that creates a friction of the unfamiliar. Halvorson takes detours via rock-fuzzing, pitch-swooping and structural dismantling in general.

On the opener, “Cleome,” she needles out a stuttering theme, Fujiwara’s drums scampering freely, while Formanek pushes and emphasizes underneath. Halvorson, who can slide without a bottleneck, scatters touches of pinched distortion across “Barn Fire Slum Brew,” developing a halting, exploratory theme. She’s the chief communicator of this combo, pinpricking as the bass and drums unite beneath her in a springy groove.

A tight crisscrossing of guitar and bass also winds its way through “Sampsonian Rhythms,” with Fujiwara offering tiny, clicking rolls, continually detailing as he drives. Halvorson investigates a ghostly surf-guitar sound on “Trigger,” making unnerving sonic fractures with her crumpled reverb, and returning after a pause for a tranquil coda. (Five years ago, Halvorson topped the category Rising Star–Guitar in the DownBeat Critics Poll, and she’s only gotten better since then.)

Halvorson provides the album’s finest tune with its title track (one of her own works), a serpentine journey to south of the border, reminiscent of the sometime Mexican styles employed by Captain Beefheart’s various guitarists.

She flips between three sounds during “The Cardinal And The Weathervane,” peaking with a Black Sabbath-scaled heaviness. Fujiwara’s detailed metal and woodblock work stands out on “Danse Insens&eacute,” as Halvorson passes gently through her most acoustic portal of the entire album.