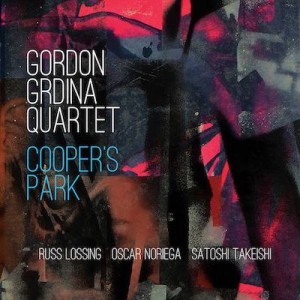 The title track acts like a would-be suite, loaded with swerves, pouncing straight into a dense, winding theme with guitar, alto saxophone and piano inseparably entwined. After this opening rush, everything disintegrates into a spacious probing. Halfway through the track’s 18-plus minutes, a heavy riff grows, with saxophonist Oscar Noriega passionately soloing. A move from rigorous angularity to sombre reflection—and then right into headbanging—illustrates how Grdina infuses his work with weight, thrust and dynamism.

The bandleader doesn’t attempt to play oud in the traditional fashion, at least not on this album. Here, it’s gnarled by distortion, chuggingly riffed, although his sound is “natural” on “Wayward,” the song making no dramatic shifts. It’s the calm before “Night Sweats,” which close out the album as powerful rifflets pile up via harsh clavinet and guitar edges, Noriega biding his time before a flaming entrance.

Most of Grdina’s pieces on Cooper’s Park are extended, and he always ensures that no single moment is expendable.