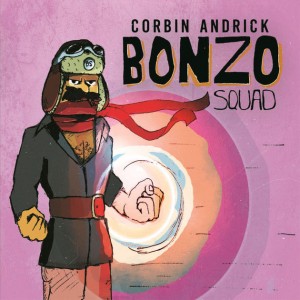 Techy fusion was never my first love, and if you think the same, this tight, explosive ensemble will likely win you over. Saxophonist Corbin Andrick is a young master who should be better known. His most obvious antecedent—given the driving, lyrical playing and edgy, communicative alto sound—is Kenny Garrett. Given that Andrick performed Garrett’s Songbook album as part of Chris Anderson’s Jazz Record Art Collective series, that’s salient.

This group assembled from weekly gigs at Chicago’s Arrogant Frog, and its members are mightily in synch, each a distinct, strong personality. Drummer Zack Marks is focused and energized, more rock savvy in his cement-steady beat, while bassist Vogt is a textural player who uses pedals to flip his role from anchor to rudder. Most versatile may be keyboardist Andrew Lawrence, commanding a raft of flavors from Rhodes, organ, piano and Moog. Lawrence is versed in Bach counterpoint but interpolates wry, unexpected elements, then retreats into tasteful background motifs or lockstep lines with Andrick.

“Lemons” toggles from limpid-mellow through nimble-linear to defiant Supertramp-like backbeat funk (through which Andrick is a fine navigator). There’s a palpable sense of simpatico, and though each musician contributed compositions, there’s no claim as to who did what in the liner notes, just collective consciousness.

The Bad Plus’ bold aesthetic is suggested by dramatic dynamic shifts—“Pearhofjax” sidles in whimsically with poppy bass then melts into mayhem—guitarist Gold unfettered like a Chicago bluesman at the apex of catharsis. Such outrage makes this group a lot of fun. A welcome shift with Andrick’s flute on the free-form “S & S” spills into the mock-smooth hit cut “Shack Dog,” heralded by Lawrence’s goofily hip Moog, Vogt’s briefly grunge-processed bass, Marks’ hung-back beats and Gold’s pecky punctuation.

Bonzo Squad is great live, equally adept at pretty balladry (“Maybe That Was It”) as they are at breeze-block grooves with squirrelly lines. It’s captured here as also their openness to unpredictable guests, in this case, rapper Samy.Language, who drops unusually urgent flow on “Bottom’s Up.” DB