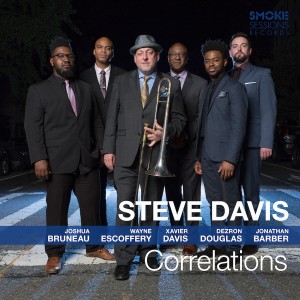 Trombone ace Steve Davis has put together a new sextet, introduced here on a set of inspired new compositions and fresh arrangements of classic jazz tunes.

The multigenerational group—which includes trumpeter Joshua Bruneau, saxophonist Wayne Escoffery, pianist Xavier Davis, bassist Dezron Douglas and drummer Jonathan Barber—benefits from plenty of shared history and deep connections, both on the bandstand and under the tutelage of alto saxophonist and educator Jackie McLean (1931–2006) at University of Hartford’s Hartt School of Music. When this recording was made last September, the band was newly formed, having played together as an ensemble for the first time the previous weekend at Smoke in New York. The musicians show tremendous enthusiasm for the material, eloquently arranged by Davis for a three-horn front line à la Art Blakey’s Jazz Messengers—of which the trombonist was a member in the early ’90s. Their solos brim with a sense of adventurousness and burn with fire and conviction. Highlights include the carefree opener, “Embarcadero,” with its breezy Latin groove and tasty horn voicings; “Bautista’s Revenge,” which features the distinct touch and polyrhythmic mastery of special guest percussionist Cyro Baptista, not to mention a killer trumpet ride by Bruneau; the straightahead swinger “Blues For Owen,” dedicated to late jazz journalist Owen McNally; the Thad Jones chestnut “A Child Is Born,” which reveals the finesse and lyricism that have characterized Davis’ playing for decades; a gorgeously interpreted version of Horace Silver’s serene ballad “Peace”; and a rousing take on McCoy Tyner’s “Inner Glimpse” that closes the album with a show of the ensemble’s full force.