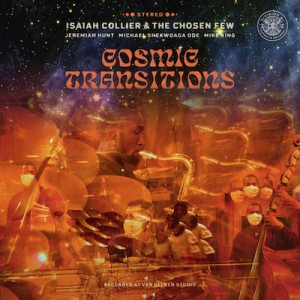 This offering is the third from the Chicago-based saxophonist, who at the age of 23 has transcended the realm of prodigy. It is not his age that shocks. It is what he’s playing. Isaiah Collier and his band, the Chosen Few, walk through several moments of transition in the music, moving from its foundation in the blues directly into hard-bop. What we know as the avant-garde are an extension of the blues. And this album handles the blues with care. They are the foundation, again and again, for a musical gift that is an ancestral inheritance.

Fully in the tradition, Collier’s music is not unthinking imitation. Though he recorded this album in 2020 at Rudy Van Gelder’s studio, utilizing the same equipment that John Coltrane used for A Love Supreme, Collier’s move is to honor transition by reanimating it. This is no easy task. One has to be prepared, something Collier clearly understands.

It is an album inspired by the cosmic energy of Mercury in retrograde. From the downbeat, with a literal tolling of the bell, until the final note that finds Collier improvising, forcing the limits of his soprano saxophone, Cosmic Transitions is like the moments after an afternoon rainstorm. What Collier describes as the survival process, of living through the matrix, is a sound that disturbs the grounds of our imagination. Over five movements, the suite can be heard as a single statement: The blues give life to ballads, which give life to bebop, which are merely expressions of free modes of expression.