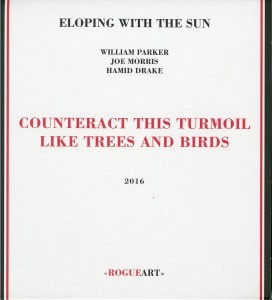 Eloping With The Sun

Hamid Drake and William Parker have been playing together for over 20 years. Their mutual understanding of rhythmic and improvisational priorities is close and complete, but there’s more to their partnership than that. They also share a faith that music facilitates spiritual experience, and they often signal their engagement with this facet of music by playing folk instruments from around the world. This practice becomes a dominant mode when they play with Joe Morris, a highly accomplished guitarist and bassist who likewise favors an assortment of other acoustic instruments.

The trio is named after another album that the group recorded 15 years ago, and while they haven’t spent the time between making records they’ve continued to play together. The passage of time has added to the three men’s musical empathy, and one suspects that they’ve also spent some of that time in music stores; there are quite a few more instruments on this record than there were on the first one. There are clear antecedents for this approach: Don Cherry’s duo with Edward Blackwell and the large ensembles he convened during his sojourn in Sweden come to mind, as well as the Art Ensemble Of Chicago.

But Morris, Drake, and Parker have been living with their little instruments and the ethnographic sources they draw upon for a lot longer than Cherry or the AEC had when they made classic records like Mu and People In Sorrow. They’ve had more time to learn the roots, and more time to forget what they’ve learned and forge a language specific to this ensemble.