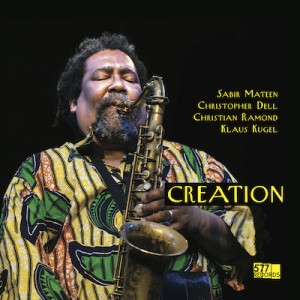 A onetime member of Horace Tapscott’s Pan-Afrikan Peoples Arkestra and a fixture on the New York free-jazz scene, reedist Sabir Mateen recently has been exploring the potential of electronica, working with synthesist William Simone on 2016’s clangorous Joys!, and overdubbing Sun Ra-schooled Farfisa onto 2020’s Survival Situation. Creation, however, moves in the opposite direction, offering a thrashing, wailing throwback to the avant-garde sound of the late 1960s.

Recorded in Berlin before a small but enthusiastic audience, the album finds Mateen backed by a trio of German performers and playing in a style that offers no regular pulse, no melodic themes and no obvious structure. The album is one continuous performance of “Creation,” which is split into two parts on the 47-minute CD, plus a third section on the 71-minute download. It’s not clear whether that title refers to the act of improvisation or the universe itself.

Regardless, Mateen is manically intense throughout, with lots of vocalized altissimo—sometimes shrieking, sometimes wailing. But the emphasis is on sustained tones, jarring honks and simple lines; there are no “sheets of sound” here.

Bassist Christian Ramond and drummer Klaus Kugel largely do the free-jazz thing, stressing disjointed lines and polyrhythmic accents over a steady pulse, but do briefly settle into a nice, swinging groove behind vibraphonist Christopher Dell midway through part two. Dell, meanwhile, is the star of the show, dropping cool, probing chords behind Mateen’s eruptions, and generally serving as an anchor to Ramond and Kugel’s rhythmic explorations.