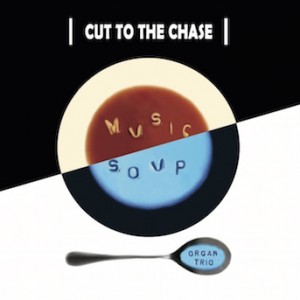 Organist-singer Evgenia Karlafti and guitarist Nestor Dimopoulos, who are both from Greece, have worked together on and off since 1998. In 2006 they formed Music Soup, an organ trio which currently features drummer Vagelis Kotzabasis. While the unit is based in Greece—liner notes writer Nikos Fotakis tries his darndest to make it sound as if the influence and inspiration of Athens can be heard throughout this CD—Music Soup sounds very much like an American group.

Cut To The Chase features the trio (which has Anastasia Gouliaris playing drums on one song) performing nine originals written jointly or separately by the two co-leaders. The music fits easily into the area of soul jazz and hard-bop, never really stretching the idiom but playing within the mainstream with spirit and joy. While four songs have forgettable vocals by Karlafti, the emphasis throughout is on the trio, which could pass at times for Joey DeFrancesco’s group. Two numbers have the welcome addition of three horn players, each of whom solo well.

Among the highlights are the hyper and crowded opener “Cut To The Chase,” the medium-tempo minor blues “Movin’,” the catchy “Senior Citizen” (dedicated to Wes Montgomery), and the medium-tempo ballad “Skywalk,” a melodic piece that deserves to be covered by others.

Fans of organ combos will find much to enjoy in this pleasing effort.