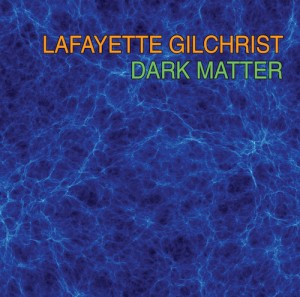 Because he first made his mark with the rumbling “Assume The Position,” featured on David Simon’s The Wire, pianist Lafayette Gilchrist frequently is linked with the brassy, beat-heavy sound of his New Volcanoes band. But Dark Matter offers another view of the pianist. Recorded during solo a concert in his hometown of Baltimore, Dark Matter includes material from his past two albums with the band, but this isn’t acoustic revisionism. Recorded in 2016, before either New Urban World Blues or Deep Dancing Suite were released, the versions here of “Happy Birthday Sucker” and the title tune are instructive. Played solo, the former might lack the hypnotic intensity of the full-band version, but there’s a swagger to Gilchrist’s left hand that underscores his debt to New Orleans piano. That rhythm was a recurring motif on his previous solo album, The View From Here, but this time it’s just one of a number of arrows in his quiver. “For The Go–Go” has its share of Crescent City spice, but its central groove derives from the bounce of D.C.’s go-go scene. Gilchrist’s best moments, though, come when he broadens the music’s dynamic range, “Spontaneous Combustion” being a particularly good example: sometimes pensive, sometimes pounding and blessed with a harmonic playfulness that evokes Thelonious Monk at his most whimsical.