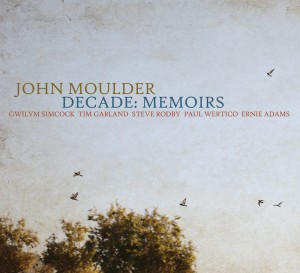 The lovely Decade: Memoirs is as pastoral as the photograph on its cover—not exactly the expectation for a Chicagoan, like guitarist John Moulder.

The heavy folk and country vibe, the spaciousness and high-note reaches of “About Us” and its separately tracked introduction are a natural fit for Moulder’s flat-picked acoustic guitar; during the introduction, he even sounds like a dulcimer. “One Last Call” goes so far as to paraphrase the vamp from Neil Young’s “Don’t Let It Bring You Down.” And the melody of “Gregory’s Hymn” echoes that of “The Wichita Lineman.”

However, that feel has as much to do with the band’s timbral blend as with the songs themselves. The harmony behind “Retreat Into Autumn” is dark and somewhat ambiguous, but its slow waltz pacing and the mellow tone of Tim Garland’s bass clarinet temper any abrasiveness. “African Sunset” is a slinky contrafact of “Cantaloupe Island”: hardly folk music. While Moulder’s solo is pure post-bop in its language, he plays it in a clean, unprocessed tone, overdubbed onto an acoustic rhythm guitar line that softens its attack. So does pianist Gwilym Simcock, whose exquisite touch quietly defines the album.

More than anything, the mood of Decade: Memoirs comes from, well, its mood. It’s a sentimental recording that ranges from the regret-tinged nostalgia of “Remembrance” to the warmth of “Gregory’s Hymn.” It’s only natural that the compositions here are handled with delicacy, and to Moulder and company’s credit, they also do it with beauty.