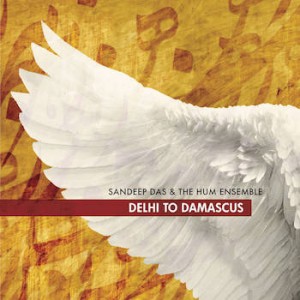 For tabla player Sandeep Das, music isn’t merely entertainment: It’s a vehicle for conveying his deeply held beliefs. The liner notes to his new album, Delhi To Damascus, provide a mini-course in history and philosophy, and the 63-minute program gracefully mixes elements of Indian classical music with traditional styles that originated in Syria.

Under the canopy of his nonprofit initiative, Transcending Borders One Note at a Time, Das’ goal is to use music to unite people across geographic and cultural divides, and his new album fulfills that mission, drawing upon the borderless, genre-blending aesthetic to which he has contributed during the past 20 years as a member of Yo-Yo Ma’s Silkroad Ensemble.

Surrounding himself with players deeply immersed in ethnomusicology, Das has crafted tracks that showcase the shared timbral colors of the four instruments, resulting in an organic set of music that not only warrants repeated spins, it practically demands it. In the hands of others, this type of culture-mixing music might sound dry or overly academic, but empathetic leaders like Ma and Das know that getting listeners to bob their heads is just as important as sparking their intellectual curiosity.

The program consists of original compositions by band members, as well as their arrangements of traditional material, including some Indian ragas. The album’s zenith is “I Came, I Saw, I Surrendered,” a traditional tune arranged by Das and Karmakar that showcases a hypnotic dialogue between the plucked sitar and the bowed sarangi, before building to a mighty sonic wave that crests to become a completely safe yet effective mood elevator. Sculpting an organic program that can be both soothing and exciting is no easy task, but this quartet was more than up for the challenge on this, its recorded debut.

With Delhi To Damascus, Das and his fellow travelers have delivered a road map for some irresistible aural adventures.