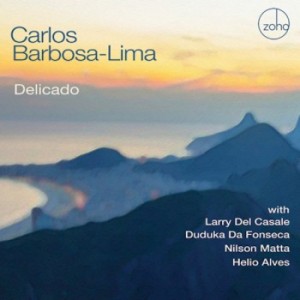 The Zoho label has earned a strong reputation in part because of its commitment to Brazilian music and legendary artists such as acoustic guitarist Carlos Barbosa-Lima, who, after moving to New York in the 1980s, frequently collaborated with fellow countryman Antônio Carlos Jobim (1927–’94). Delicado, Barbosa-Lima’s 10th release for Zoho, is a tribute to the music traditions of Rio de Janeiro, such as bossa nova, samba and choro. The program includes compositions by Jobim, Luiz Bonfá (1922–2001), João Pernambuco (1883–1947), Baden Powell (1937–2000) and others. For the recording sessions, the leader assembled an all-star quintet, featuring artists who have appeared on previous Zoho releases: Larry Del Casale (guitar), Duduka Da Fonseca (percussion), Nilson Matta (bass) and Helio Alves (piano).

Barbosa-Lima, still spry and spectacular at age 74, graciously shares the spotlight with his bandmates. The title track—composed by choro master Waldir Azevedo (1923–1980)—reflects the quintet’s great rapport, with subtle, intricate interaction, and both guitarists playing the melody.

Sixty years after the release of director Marcel Camus’ Orfeu Negro (Black Orpheus), musicians still find inspiration in the film’s soundtrack, which features work by Jobim and Bonfá. In his 15-song program, Barbosa-Lima interprets three tunes from the film’s score. The band’s version of “Samba De Orfeu” is an earworm with delightful percussive accents. A creative arrangement of “A Felicidade,” another samba number, segues from a full-band treatment into a twisting path of delicate solo parts and whimsical segments that evoke the sounds of tropical birds. Del Casale and Barbosa-Lima—who have been collaborators for more than 15 years—offer a gorgeous duo reading of “Manhã De Carnaval” that tugs at the heartstrings. Barbosa-Lima’s arrangement of “Odeon,” written by pianist Ernesto Nazareth (1863–1934), illustrates the drama and poignancy that this icon can generate in a solo guitar setting.

Delicado will please longtime fans and also might serve as a fine introduction to some of Brazil’s greatest composers.