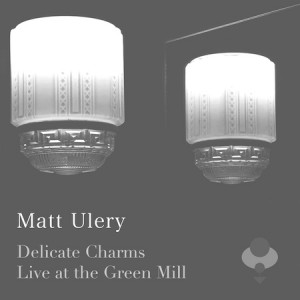 Matt Ulery first conceived of Delicate Charms as vehicle for long-form pieces that expressed sentiments that the Chicago-based composer and bassist could not put into words. In its original form, the quintet possessed a non-standard front line of violin and alto saxophone. While each musician is an accomplished improviser, the group’s first pieces were mostly written out. A lot has happened since, and Delicate Charms: Live At The Green Mill reflects those changes.

Travel became complicated in COVID times, so out-of-towners Zack Brock and Rob Clearfield have been replaced by James Davis and Paul Bedal. The change of personnel brought a change in instrumentation, and swapping violin for trumpet brings the group’s chamber sound closer to of a that of a straightahead jazz combo. And instead of getting things just right in the studio, Ulery captured shared urgency of musicians and audiences returning to live performance by recording live at Chicago’s Green Mill. This decision likely contributed to the album’s greatest strength: the players’ spirited performances.

Ulery composed six new pieces, and each zips like a bullet train. But the themes are not as memorable as what the musicians do with them. “Consumer Of Time,” snaps taut during Ulery’s introduction and Davis’ ardent solo, but sags during ensemble passages. “The Arrival” comes to life as Bedal uses the melody as a launching platform, and peaks when Ward builds from nimbly articulated phrases to an impassioned climax.