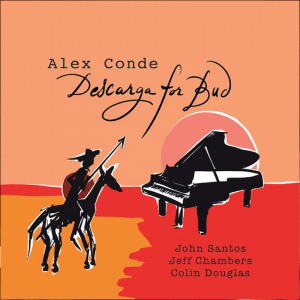 On this new release from Alex Conde, the virtuoso Spanish pianist puts his personal spin on nine landmark compositions by the legendary pianist and bebop architect Bud Powell. Descarga For Bud is the second installment in Conde’s Descaragas series, which he launched in 2015 with the release of the critically acclaimed Descaraga For Monk (Zoho), dedicated to the oeuvre of the iconoclastic pianist Thelonious Monk. Throughout Descaraga For Bud, Conde demonstrates his prowess at the keyboard, each note landing right on top of the beat in an inspired fusion of the classic bebop lexicon with traditional Caribbean and Iberoamerican stylings. For his supporting cast, Conde brings back percussionist John Santos and bassist Jeff Chambers from his Monk outing, and adds drummer Colin Douglas to the mix. On tracks such as “Oblivion,” “Parisian Thoroughfare” and “Bouncing With Bud,” Conde’s arrangements revolve around traditional flamenco forms and call for the talents of fellow countrymen Sergio Martínez on cajón and claps and flamenco guitarist Jose Luis de la Paz. The album also features trumpeter Mike Olmos, who effortlessly spins bebop lines over the bulerías arrangement of “The Fruit” and Powell’s challenging masterpiece “Tempus Fugit,” and steel pan player Jeff Narell, who brings syncopated sunshine to the calypso “Wail.” Producer Ricky Fataar, the South African multi-instrumentalist known for his roles in The Beach Boys and the Beatles spoof group The Rutles, lends his magic touch to this refreshing, uplifting and highly accessible recording.