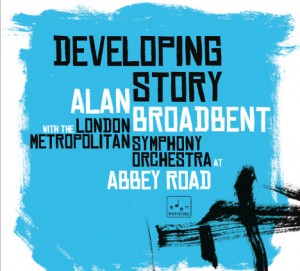 Alan Broadbent is a musician’s musician. As a pianist, composer, arranger and conductor, his work has tremendously enhanced albums by Woody Herman, Natalie Cole, Charlie Haden’s Quartet West and Sir Paul McCartney. Broadbent wrote orchestrations for four tracks on Diana Krall’s excellent new album, Turn Up The Quiet (Verve). Fans of his work with Krall will definitely want to check out his new leader project, Developing Story, which was recorded with the London Metropolitan Orchestra in Abbey Road Studio 1. Producer Ralf Kemper does a masterful job of blending the music of the orchestra with that of a nimble jazz piano trio: Broadbent, bassist Harvie S and drummer Peter Erskine. The anchor piece for this album is a three-movement suite titled Developing Story [For Jazz Trio And Orchestra], and in the liner notes, Broadbent explains that it was somewhat inspired by the music of Gustav Mahler. This 26-minute suite is a brilliant showcase for Broadbent the composer, and the third movement, in particular, highlights his elegant pianism. Compelling renditions of two Miles Davis tunes, “Blue In Green” and “Milestones,” illustrate Broadbent’s stellar skills as an arranger. Listeners need not be familiar with the versions of those tunes by Davis or Bill Evans (or anyone else) to appreciate the power and drama that Broadbent and company have crafted here. The album concludes with a breathtaking interpretation of “Children Of Lima,” which Broadbent wrote for Herman and the Houston Symphony in the 1970s.