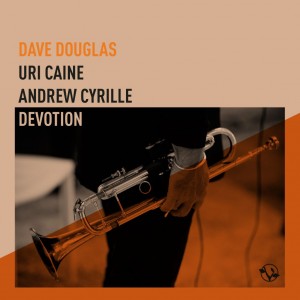 It’s not often that a bandleader is so selfless that they’ll open an album with a track they don’t play on. It seems perfectly appropriate here, though, because trumpeter Dave Douglas’ Devotion is all about recognizing the value of others, particularly those who have inspired him musically or artistically. “Curly,” which opens the album, is a tune Douglas wrote in tribute to his favorite Stooge, Jerome Horwitz (a.k.a. Curly Howard). There’s no slapstick, but it’s not hard to recognize Horwitz’s gait in the manic syncopation of the melody, which pianist Uri Caine and drummer Andrew Cyrille happily spin into controlled chaos.

Not every connection is aurally obvious, though. “D’Andrea” and the lilting, waltz-tempo “Francis Of Anthony” might ring bells for those familiar with Italian jazz pianist Franco D’Andrea. If not, it’s still easy to be captivated by the unusual intervallic symmetry of Douglas’ melodies. On the other hand, the jaunty, gospel-inflected “Miljøsang,” which the trumpeter offers in tribute to pianist/composer Carla Bley, sounds more like mid-’70s Keith Jarrett. But that might have more to do with the way Caine plays it than how Douglas wrote it.

To an extent, though, Douglas’ liner notes create more distraction than illumination. Trying to hear the Dizzy Gillespie influence in the wistful “We Pray”—is it the half-valving or use of chromatics in Douglas’ solo?—could obscure the solemn beauty of the music itself, not to mention the way it furthers the churchy vibe Caine and Douglas established on their 2014 duo album, Present Joys (Greenleaf Music).

Better to remember that devotion can be offered in a variety of ways, and no single version is better than the others. Perhaps that’s why the album ends with Alexander Johnson’s sacred harp hymn, “Devotion,” and a performance that captures both the literal and figurative meanings of the word, as well as offering some of the album’s most inspired interplay.