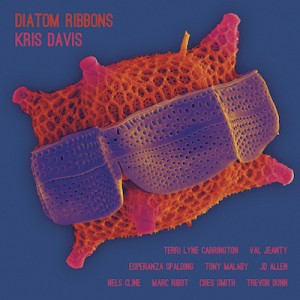 In a recent Q&A with Wendell Berry, The New Yorker’s Amanda Petrusich asks the poet and naturalist about his output being connected to the past, if “all new work is in conversation with everything that preceded it, that language itself is simply a continuum.”

The best music—within the jazz world and beyond it—can contain a multitude of ideas and sounds, reference endless genres and tell listeners something about the moment that it was recorded, as well as the past. Diatom Ribbons­—and actually a lot about pianist Kris Davis in general—does precisely that.

Vocal snippets of Cecil Taylor crop up; Esperanza Spalding recites a poem by former U.S. Poet Laureate Gwendolyn Brooks; and between Terri Lyne Carrington and producer/turntablist Val Jeanty, who ostensibly function as Davis’ trio on Diatom Ribbons, there’s a concerted beat-centric feel to more than a few spots across the album.

Synthesizing so much information could pretty clearly have resulted in a messy pastiche, but bandleader Davis has taken it upon herself to translate the past’s artistic investigations and triumphs for contemporary listeners—and those in the future.