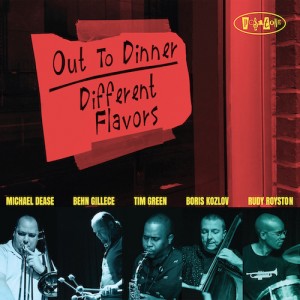 Inspired by Eric Dolphy’s Out To Lunch!, Out To Dinner presents a collaborative musical experience, one less avant-garde than the 1964 effort. But Different Flavors nevertheless remains open and communicative throughout.

Drummer Rudy Royston’s performance—consistently engaged and responsive—emerges as the driving force, drawing attention to melodic statements, conversing with soloists and maintaining the power of groove, while spinning out complex rhythmic interjections. The combination of space and motivic development allow both Royston and bassist Boris Kozlov to interject and contribute as equals, rather than as accompanists. Alternatively, trombonist Michael Dease and alto saxophonist Tim Green approach the communicative environment with a different perspective. Dease’s use of quick lines and timbral variety continually push the rhythm section to new levels of energy, as on “Magic Square.” Green takes the most straightahead approach here, finding creative ways to weave bop-like lines through the musical environment.