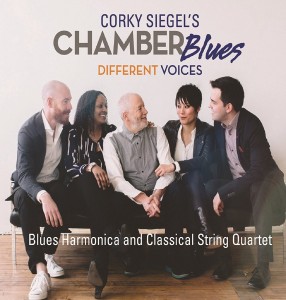 Corky Siegel is an underappreciated national treasure. The music he makes is so unusual that for his latest release, Different Voices, he has included a description on the album cover: “Blues Harmonica and Classical String Quartet.” For more than 50 years, Siegel has been melding his masterful blues harmonica playing with accessible classical music, and at age 73, he has just released an album containing some of the best work of his career. On paper, it might sound as if Siegel weaves together various instruments and genres just for the sake of being eccentric, or educational. But in practice, the 12 songs on Different Voices form a cohesive program, all tied together by his emotive harmonica work. The opening track, “Missing Persons Blues–Op. 26,” features a terrific tenor saxophone solo by jazz titan Ernie Watts. “One” contains soaring, hypnotic vocals by rock singer Matthew Santos, who, at times, sounds a bit like the late Jeff Buckley. Siegel recruited singer-songwriter Marcy Levy (aka Marcella Detroit) to sing lead on a slow, fresh rendition of “Lay Down Sally,” a classic that she wrote with Eric Clapton and George Terry. Octogenarian bluesman Sam Lay offers an authentic reading of “Flip, Flop And Fly,” which is preceded by Siegel’s compelling original composition “Italian Shuffle.” Siegel teams up with folk trio Sons of the Never Wrong for an epic version of the gospel standard “I’ll Fly Away.” An arrangement of “Galloping Horses” pairs the erhu (an ancient, two-stringed fiddle played by violinist Chihsuan Yang) with vocal beat-boxing (deftly delivered by Santos). It’s extremely impressive that the core band—Siegel, Yang, Jaime Gorgojo (violin), Dave Moss (viola) and Jocelyn Butler Shoulders (cello)—can craft music that gracefully incorporates contributions from diverse collaborators, including tabla players Sandeep Das and Frankie Donaldson, yet still feels wholly organic. Among the upcoming concerts by Corky Siegel’s Chamber Blues are shows at the Acorn Theater in Three Oaks, Michigan (April 9); Colectivo in Milwaukee (May 13) and City Winery in Chicago (June 2).