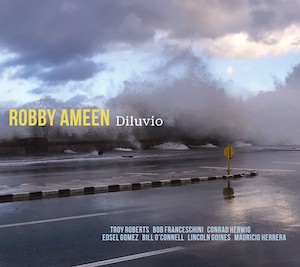 Is this a panacea for what we’re all experiencing now? Probably not. But Diluvio definitely will displace listeners’ anxiety for about 50 minutes as drummer Robby Ameen moves through his keenly honed influences, expanding beyond the Afro-Cuban sounds he’s associated with as the album rides a wave of eclecticism that eventually settles somewhere outside of genre.

“The Drifter’s Plan” comes off a bit too smooth and ranks as the only real misstep on the collection. But on “Cremant”—presumably a rumination on drinking the sparkling wine—a Latin feel dominates as trombonist Conrad Herwig slides through percussion accents without flaw. Saxophonist Bob Franceschini quoting Henry Mancini’s theme from The Pink Panther comes as an added bonus. “Mixology”—a title that might just have been an apt name for the album—is a straightahead effort, as Franceschini’s joined by tenorist Troy Roberts on the frontline.

Ameen is and forever will be affiliated with performers like Dizzy Gillespie, Rubén Blades and Horacio “El Negro” Hernandez. But closing with a version of John Coltrane’s “Impressions” is a nice touch, and again points to Ameen’s continued desire to explore any and every kind of music that’s inspired him throughout his lengthy career.