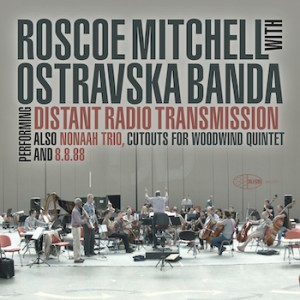 In recent years, reedist Roscoe Mitchell has been mining gold from his rigorous improvisation practice, creating meticulously detailed compositions by transcribing and mapping out scores from past spontaneous creations. This new collection gathers several iterations of such procedures, its source material going back decades.

The centerpiece is the title work—the only piece featuring Mitchell as a performer—which was transcribed from a 2013 trio improvisation. The densely polyphonic piece was performed here by Czech new-music orchestra Ostravská Banda, with quicksilver overlays from Mitchell on sopranino saxophone, James Fei on electronics and Thomas Buckner on vocals. The arrangement provides a fascinating demonstration of Mitchell’s multi-directional thinking, and a powerful rejoinder to those who denigrate free-improv as gibberish, as the 20-minute excursion unfolds in peaks and valleys.

“Nonaah Trio” is the latest in a series of transcribed versions of the 1976 solo piece “Nonaah,” reconfiguring its corkscrewing core into something more expansive but no less idea-packed. “Cutouts For Woodwind Quintet” isn’t based on improvised material, but a revision of the 1984–’85 composition, resulting in melodic eddies twirling in harmonious motion. The album closes with “8.8.88,” a technically bruising solo piece featured as an automated performance programmed by Seth Horvitz for a Yahama Disklavier piano, which perfects its execution, but loses some of the warmth of the human version on the reedist’s 2011 album Numbers.