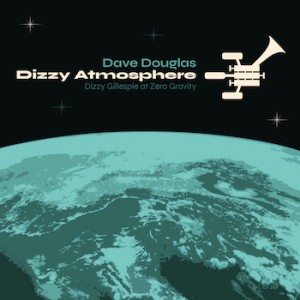 Anyone who’s encountered Dave Douglas’ past dedications to folks like Wayne Shorter or Mary Lou Williams knows better than to expect a conventional tribute from the trumpeter. Dizzy Atmosphere: Dizzy Gillespie At Zero Gravity does, however, fit Douglas’ own conventions given those earlier efforts.

Two of nine tracks here are Gillespie covers; the others are originals whose inspirations mostly are cloaked in Douglas’ own envelope-pushing conception. It’s not easy to detect the bebop giant in the unearthly atmosphere of “See Me Now,” Matthew Stevens’ guitar chords seeping into Douglas and second trumpeter Dave Adewumi’s counterpoint like a strange afterglow. A quote from Gillespie’s “Bebop” is allegedly hidden in Douglas’ “Mondrian,” a tune as abstract as its namesake; this reviewer has yet to find it.

The trumpeters’ interplay is a recurring motif, though not a competitive one: Adewumi brings a dark trepidation to Douglas’ bright urgency on “Cadillac” and the pretty “Pacific.” The other through-line is the whip-smart rhythm section of pianist Fabian Almazan, bassist Carmen Rothwell and drummer Joey Baron, as steady and sensitive on “We Pray” as they are unshakable on “Subterfuge’s” change-ups. Then there’s the instrumentation: unusual, but matches Gillespie’s 1970s quintet (in which Jon Faddis was often featured, thus the second trumpet). Gillespie’s legacy isn’t completely dissolved in this matrix, though that fact ends up saying more about Douglas’ brilliance than the subject of his homage.