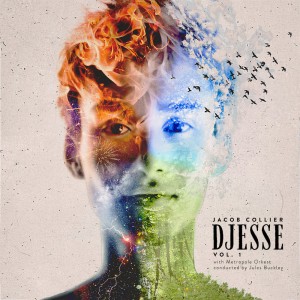 Though Jacob Collier describes Djesse—a multidisc project—as a single album, but four individual records, any sense of fragmentation at the end of Vol. 1 is washed away by the bandleader’s festival-flavored rendition of “All Night Long,” less an album closer than a pause before a much longer, indepth conversation.

Metropole Orkest’s foundation significantly directs Djesse’s expansive nature, the symphonic supplementation shining on “Overture,” its sweeping string parts and pentatonic melodic passages eliciting visions of a bustling Southeast Asian metropolis. Still, the album is a manifestation of Collier’s experiences, brought to life with iconic collaborators like gnawa musician Hamid El Kasri, Take 6, and incognito vocal cameos from Quincy Jones and Steve Vai. The bandleader’s own versatility can’t be undersold even in that company, as Collier contributes everything from guitar to harmonium and beyond. His compositions display ostentatious character throughout, but with a shifting tone, each piece eventually feels like an extravagant adventure. Just contrasting “Overture” with album opener “Home Is” illuminates Djesse’s fantastical breadth. However, it’s that same severe variation—tempo, instrumentation, fundamental compositional form-—that provides the album with a sense of cohesion, potentially setting up listeners for the next installment of the journey.