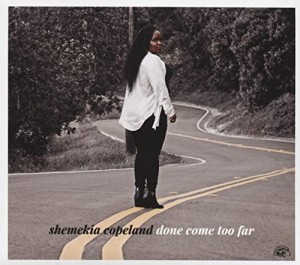 Sadly, it’s a great time for blues singers. As on recent releases by Gary Clark Jr., Mavis Staples and others, Shemekia Copeland finds no shortage of social ills and historical wrongs to rage about, accompanied by a snarling corps of fine guitarists led by Will Kimbrough.

Although there are still faithless lovers to mourn and the Lord to praise, on songs like “Why Why Why” and “Barefoot In Heaven,” Copeland finds her fire when confronting the realities of sending a Black child outside, school shootings and the BLM as a whole.

Spitting couplets like “We were silenced at the Lorraine … you can kill a man, but not a dream” — composed by Kimbrough and John Hahn — Copeland is matched in intensity by her core unit of Kimbrough, bassist Lex Price and drummer Pete Abbott, particularly on two variations of the “too far” theme. As producer, Kimbrough pushes the intensity up another level by adding passionate soloists like Sonny Landreth and Cedric Burnside.

For the devastating “The Dolls Are Sleeping,” a tale of child sexual abuse told through a single image of dolls on a bedroom shelf, Kimbrough takes a decidedly different approach: distilling the presentation to just Oliver Woods’ acoustic guitar and Copeland’s gritty voice.

Then, just when you think the world is too dark to contemplate, the band lightens things up with the punny novelty song “Fell In A Love With A Honky,” which might be little more than a throwaway were it not for how committed the band sounds, with Aaron Lee Tasjan added on guitar.

Done Come Too Far: Too Far To Be Gone; Pink Turns To Red; The Talk; Gullah Geechee; Why Why Why; Fried Catfish And Bibles; Done Come Too Far; Barefoot In Heaven; Fell In Love With A Honky; The Dolls Are Sleeping; Dumb It Down; Nobody But You. (45:48)
Personnel: Shemekia Copeland and many more.
Ordering Info: alligator.com