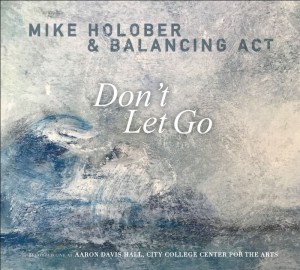 Hang in there, everybody; the world isn’t over yet. One person holding out hope during this age of impending doom is concerned citizen Mike Holober, the acclaimed New York pianist and composer/arranger known for his deep-dive collaborations with such esteemed large jazz ensembles as the WDR Big Band, the HR Big Band and the Gotham Jazz Orchestra. A recent Chamber Music America New Jazz Works commission has brought us Holober’s latest ambition: a complete song-cycle built around the concept of hope. Titled Don’t Let Go, the concert-length album features Balancing Act, a jazz octet with voice that Holober formed in 2015, performing live in October 2019 at Aaron Davis Hall on the campus of the City College of New York, where Holober has taught since 1995. The smaller ensemble satisfies Holober’s need to make a completely personal statement, one in which his own artistic goals are matched with the fruits of the collective. This particular configuration gives him an opportunity to balance his classical and jazz impulses in an all-inclusive manner that entices listeners from across the musical spectrum. And that’s exactly what you get with Don’t Let Go. Ensemble members Marvin Stamm (trumpet and flugelhorn), Dick Oatts (alto/soprano saxophone, flute), Jason Rigby (tenor saxophone, clarinet, bass clarinet), Mark Patterson (trombone), Mike McGuirk (bass) and Dennis Mackrel (drums) navigate the jazz-classical divide with expertise and finesse, their orchestral-level chops easily managing the many contrasting stylistic elements at play within Holober’s nuance-rich orchestrations. Brazilian vocalist Jamile plays an integral role here: Whether she’s singing out front or vocalizing wordlessly within the ensemble, her presence enhances the group’s expressive palette and dynamic interplay. Don’t Let Go comes with two CDs of music, one for each set from the Aaron Davis Hall performance. Every song in the sequence sounds and feels just like its title suggests — “Breathe Deep,” “Burnin’ Daylight,” “A Summer Midnight’s Dream” and “Touch The Sky” being prime examples. The title track closes the album with what amounts to a direct order from the visionary Holober: Let the music uplift you, and embrace optimism at any cost.