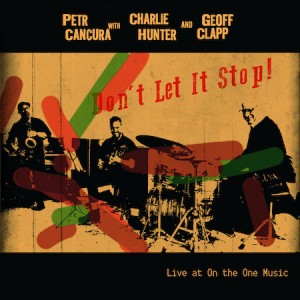 Saxophonist Petr Cancura has a sound and approach not unlike Jan Gabarek. Many of the tunes the bandleader wrote for this live trio date come off like they could have been from a Gabarek-featuring ’70s quartet helmed by Keith Jarrett: blues and gospel grooves occasionally laced with jazz-centric harmonies, finished off with one-chord vamps.

Other influences abound. “Soulidity” sports a Horace Silver-ish Latin-rock boogaloo vibe. “Country Song” is a loping slice of Americana, reminiscent of Bill Frisell’s memorable guitar/saxophone/drums trio with Joe Lovano and Paul Motian. Charlie Hunter does a great Frisellian impression here, while also handling the bass part on his modified guitar. Hunter’s a pioneer of the style, his uncanny skills utilized to the fullest on “Gettin’ Ready” and the title track, where his ability to lay down such a heavy bass groove alongside perfect double-time guitar riffs defies explanation. Hunter hooks up nicely with drummer Geoff Clapp, who measures out just the right blend of colorful attitude and sonic sensitivity.

But it’s Cancura who is the heart and soul of this project. An avid student of American blues and folk, he learned how to play mandolin and banjo, an extreme commitment for a saxophonist who emigrated to Canada from Eastern Europe. But Cancura’s jazz pedigree peeks out from time to time, as he remains impressively focused on the integrity of the music, sticking to bluesy growls, flutter tonguing and altissimo playing that’s less Lovano and more Lenny Pickett. And in this context, that’s a thing that should be treasured for as long as possible.