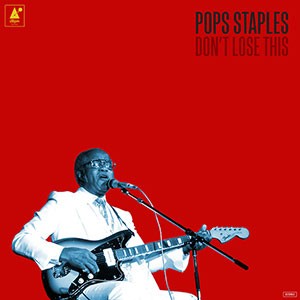 Mavis Staples, 75, is enjoying a late-career renaissance that few artists her age have ever experienced. Much of the credit goes to her producer and collaborator, Wilco leader Jeff Tweedy. In addition to helping her craft the excellent solo albums You Are Not Alone (2010) and One True Vine(2013), Tweedy helped her bring Don’t Lose This to fruition. And what a gem it is. Don’t Lose This is an album by Mavis’ famed father—and patriarch of The Staples Singers—Roebuck “Pops” Staples (1914–2000), whose guitar style was just as distinctive as his unforgettable voice. Although the 10 tracks here were built from recordings that Pops made in 1999, they have not been overly “dressed up” with digital trickery; instead, they’re presented in tasteful, respectful, relatively spare arrangements. This album is truly a family affair: Pops is the only vocalist on “Nobody’s Fault But Mine,” while “Sweet Home” features a moving duo performance by Pops and Mavis. Elsewhere, some tracks present what are essentially archival Staples Singers performances, with Pops taking the lead while his daughters Yvonne, Cleotha and Mavis deliver the type of spirited harmonies that made this family band such an important part of both gospel and soul music. The album opens with “Somebody Was Watching,” which, in classic Staples form, takes a gospel message and pairs it with an infectious groove. Positivity was at the heart of Pops’ message, and in our troubled times, the song “No News Is Good News” is particularly relevant, as this brave artist and crusader—a man who marched during the Civil Rights Movement—pleads, “Don’t you think it’s time to put the gun down?” Don’t Lose This is an album that will appeal to fans of Pops, Mavis and The Staples Singers, as well as anyone interested in the power of music to uplift one’s spirits.