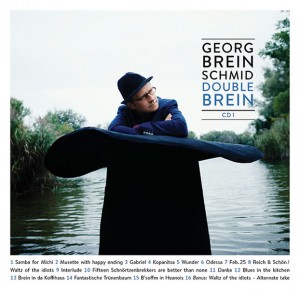 Variety can be a tiresome thing. With its constant shifting of gears and demand for reorientation, newness in listening can be a drag. Not so with Georg Breinschmid and his curious assortment of talents on Double Brein. Variety becomes the spice of life on these two discs, one essentially expressing the Austrian’s jazz/folk/world side, the other favoring a more classical bent. The connective tissue is that it’s all imbued with improvisation, regardless of form.

A certain daftness in this mix of live and studio recordings pervades many of the performances, laced with a European flair for humor. The veteran bassist knows his way around the instrument in a virtuosic sense, and has performed with many established jazz greats, including Archie Shepp and Charlie Mariano. On Double Brein, we get the 42-year-old’s full treatment of chops and attitude across 28 pieces of varying length. Along with “regular cast members,” Breinschmid pulls in an eclectic assortment of players, and sometimes has others play his music without him.

From the first notes of the spritely “Samba For Michi” on Disc One, the mood is set as pianist Antoni Donchev and soprano saxist Gerald Preinfalk surround Breinschmid’s busy plucks with just the right amount of swing and flourish. Breinschmid’s affinities for Django Reinhardt and Stephane Grappelli are on display with “Musette With Happy Ending,” a very tuneful, lively waltz featuring guitarist Diknu Schneeberger and Benjamin Schmid on violin. The first vocals (and sound effects) emerge with Thomas Gansch (doubling on trumpet) and Olga U., on the lightly driven, playful folk ditty “Gabriel.” Another flair comes with the occasional unusual time signature, as heard on the dizzying, dancing Bulgarian folk melody “Kopanitsa” in 11/8. And so it goes, with unpredictable twists and turns through 16 mostly small-group sessions on the first CD, the flavorful trumpeter/collaborator Thomas Gansch a welcomed presence on selected cuts.

Disc Two can be enjoyed as an odds-and-sods collection of originals next to some inventive rearrangements of Bach, Verdi and Liszt. The 12-and-a-half-minute “Mephistowalzer” goes a long way to encapsulate much of the spirit of this second disc, full as it is of romantic splendor, wry humor, drama and pathos. Breinschmid’s fanciful approach to playing this improvised music in a small-group setting has the effect of being intimate (“Miniature”), at times solemn (Bach’s “Violin Concerto”), other times forceful (“Irish Wedding In Bucharest”), absolutely lovely (Liszt’s “Consolation,” Breinschmid’s delicate “Schluss”), even a tad funky (a revisit to Disc One’s “Brein’s Knights”) or theatrically comic and jazzy (“Monti Csardas”). It’s virtuosity, by and large, in service to the muse.