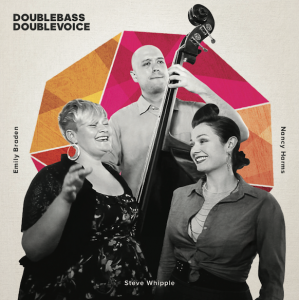 The happenstance meeting of Doublebass Doublevoice came about when a 2011 gig placed bassist Steve Whipple and vocalists Nancy Harms and Emily Braden onstage for the first time. It was a phenomenal concept on paper, but an even greater pleasure for the ears.

As Whipple’s cool bass line introduces the familiar contours of “Ribbon In The Sky,” it’s clear that his bass is as much a vocal presence as Harms and Braden. The voices, for their part, are a rhythmic, anchoring force throughout. Braden takes the lead in this Stevie Wonder hit, meshing enviably with Harms’ smoky timbre. It’s the first in a selection of modern classics dipping a toe into the waters of pop, gospel and folk.

In the latter vein, Nick Drake’s “Black Eyed Dog” spotlights Whipple’s robust double (and triple) stops, while the Lennon/McCartney rudiments of “Dear Prudence” get a lush makeover. The songstresses’ harmonies give it a forested depth that, as in every song, reveals hidden messages, layers and textures.

A handful of standards pushes further back in time, including a bluesy interpretation of “Bring It On Home To Me” and a nocturnal take on “Skylark.” The album’s highest lights, however, are its three spirituals, which bring out the soulfulness of this project in the most genuine way. “Woke Up This Morning/This Little Light Of Mine” makes for a timely diptych of freedom and hope, and the traded verses of “Traveling Shoes,” combined with Whipple’s tactile percussion, remind us in these politically wavering times of those who braved the bridges too many of us take for granted. DB