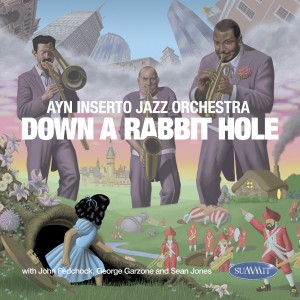 Composer and arranger Ayn Inserto enlisted three superb soloists for Down A Rabbit Hole, the first album in 10 years from her namesake orchestra. Trumpeter Sean Jones, tenor saxophonist George Garzone and trombonist John Fedchock add essential spice to the proceedings here. The three guests unleash fluid, powerful solos on the album opener, the nine-minute Inserto composition “Three And Me.” The album cover art—a Kendall Eddy painting—depicts Jones, Garzone and Fedchock as giants playing their instruments against the skyline of Boston, where Inserto, an associate professor of jazz composition at Berklee College of Music, is based.

The bandleader conducts an agile, 17-piece ensemble made up of peers, friends, longtime collaborators and even family. (Her husband, Jeff Claassen, is the lead trumpeter, and this recording features the work of three married couples.) Inserto has crafted a program that feels completely natural as big band music and includes five of her compositions. Some lesser orchestrators nowadays falter when they seize music originally penned for a combo and clumsily rework it with an arrangement that’s actually ill-suited for a large ensemble. But Inserto—who studied with Bob Brookmeyer (1929–2011)—delivers a program that gracefully exploits the strengths of big band instrumentation, as evidenced by her two-part suite titled “Part I: Ze Teach” and “Part II: And Me.” Elsewhere, Inserto offers a superb arrangement of Jones’ “BJ’s Tune,” providing a showcase for the trumpeter’s sumptuous tone. This album strikes the perfect balance between entertaining artistry and finely crafted arrangements that could be studied closely in the classroom.