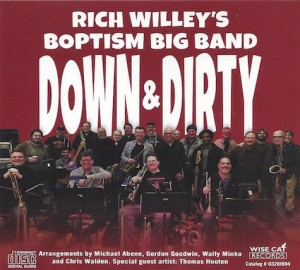 Rich Willey has built a beast of a modern big band album: Down & Dirty is a 77-minute program of 11 original tunes (and one jazz standard, “Old Folks”) orchestrated by ace arrangers and performed by a killer assortment of Los Angeles-based instrumentalists. Willey’s bass trumpet melodies and improvisations play a central role on the album, which also features the leader on traditional B-flat trumpet and flugelhorn. With help from his producer, Dan Fornero, Willey hired section players with the right combination of chops, sight-reading skills and interpretive sensibility to execute a collection of previously unseen, highly sophisticated big band charts supplied by Gordon Goodwin, Michael Abene, Chris Walden and band keyboardist Wally Minko.

A wide range of styles is presented here, from straightahead jazz and Latin grooves to funk, reggae, baroque, balladry and straight-up rock. Standout instrumentalists include lead trumpeter Wayne Bergeron, tenor saxophonist Bob Sheppard, trombonist Andy Martin and drummer Peter Erskine. Willey’s tone on bass trumpet is round and centered, fatter than a regular trumpet (which sounds roughly one octave higher), yet brighter than a trombone (which shares the same tessitura). It makes for a nice juxtaposition to the mighty brass section work that runs through much of the program. Willey’s flugelhorn tone is simply gorgeous, marked by expressive phrasing and tender dynamics. In true leader fashion, he puts his personal stamp on all the material on Down & Dirty—a major artistic accomplishment from a player who, in addition to extensive work as a sideman to the greats, has been leading his own ensembles since 1986.