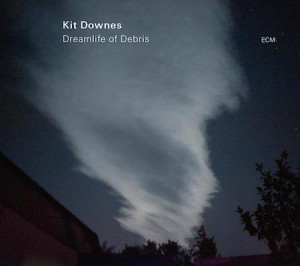 The best art arguably can encompass high and low, the profane and the sanctified.

Kit Downes, who topped the categories Rising Star–Keyboard and Rising Star–Organ in the 2019 DownBeat Critics Poll, turns in his second leader date for the venerated ECM Records, Dreamlife Of Debris, and rather easily coaxes spirited exhortations and divine simplicity out of a piano, as well as a church organ. But it’s the combination of Downes’ ghostly organ turns and the placid longtones of Tom Challenger’s tenor saxophone that make the album’s title such a fitting thing.

Just as ECM has retained a certain jazz aesthetic over the years, it has cultivated a strain of classical music with keystone releases by the likes of Arvo Pärt. The middle path might be some sort of slow-rolling minimalism, not unlike Steve Reich’s compositions or Terry Riley’s drone works from the 1960s; Downes’ take of Ruth Goller’s “M7” could have slotted into almost any of those recordings. And the bandleader’s own “Circinus” finds his organ copping some uncluttered version of decades-old austerity, while cellist Lucy Railton bows the changes and Challenger’s horn sweeps through emotions. It’s a sturdy formula that peaceably works throughout the recording.

A couple of tunes set Downes at an acoustic piano, his bandmates helping to mimic the dark and dour image of the album cover. “Blackeye,” the closer where Downes and Challenger split writing credits, opens with a contemplative feeling that’s not just pervasive here, but across a bunch of ECM works. The pair and Railton float around on clouds for about a minute-and-a-half; then 15 seconds of silence. Downes switches to organ and, making his most concerted contribution to Dreamlife, Seb Rochford comes padding in on an augmented kit that sounds like it largely consists of toms and a gong. It’s Moondog territory, and it sends the band toward its most propulsive, songlike statements. It’s also the most aggressive-sounding composition Downes has recorded on either of his leader dates for ECM. It still might not be a jazz tune, but “Blackeye” is a deeply affecting sonic turn that’s a surprise and a nod toward less experimental works—if only just vaguely.