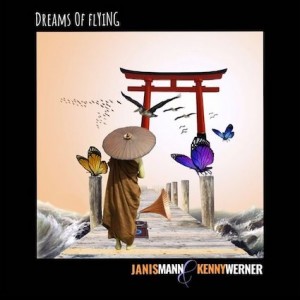 The latest release by singer Janis Mann and pianist Kenny Werner, Dreams Of Flying, combines studio sessions and live performances, recorded three years apart, on opposite U.S. coasts, with different supporting musicians. On paper, that hardly sounds like a recipe for a cohesive program. And yet, thanks to the simpatico rapport by these two veteran musicians, the result is a marvelously congruous 63-minute album.

The duo teamed up with bassist Drew Gress and drummer Duduka Da Fonseca for a 2016 session at Samurai Hotel recording studio in Queens, and in 2019, the co-leaders presented a set of duo and trio songs (with guitarist Larry Koonse) in front of a quiet audience at the Capitol Studios building in Hollywood. Every track in the program sparkles, whether the quartet is coaxing emotion out of Stevie Wonder’s 1985 hit “Overjoyed” or Mann is demonstrating her impressive vocal command on an adventurous, eight-minute trio reading of Sandy Denny’s “Who Knows Where The Time Goes.”

Mann and Werner—who collaborated on a 2013 disc, Celestial Anomaly—once again prove that the success of a jazz-meets-cabaret endeavor relies not only on strong melodies, but also on sculpting arrangements that showcase the players’ individual strengths.

The quartet version of Paul Simon’s dark ballad “I Do It For Your Love” features rich, low-end coloration, courtesy of Gress’ haunting bass. When the quartet recorded Simon’s “American Tune,” little did they know they were creating an apropos lament for the pandemic era. “I don’t know a soul who’s not been battered/ Don’t have a friend who feels at ease,” Mann sings, latter adding, “When I think of the road we’re traveling on/ I wonder what went wrong/ I can’t help it, I wonder what went wrong/ And I dreamed I was dying.”

Mann and Werner are also fond of the tunesmith Jimmy Webb, represented here by “The Moon Is A Harsh Mistress” and “Wichita Lineman.” On the latter interpretation, Werner crafts two intertwined, mesmerizing harmonic dialogues: one with Mann’s vocal line and one with the song’s familiar melody.

The composers of these 11 tracks are all famous, but Mann and Werner make many astute choices, often choosing a lesser-known composition in the tunesmith’s songbook, such as Joni Mitchell’s “Edith And The Kingpin.” Heartache is a motif in the program, as Mann digs into Alan and Marilyn Bergman’s tear-jerking lyrics for a tune penned by Johnny Mandel, “Where Do You Start,” one of the most gut-wrenching break-up songs of all time. Werner’s commentary, weaving between the verses and underneath Mann’s assured vocals, is a master class on accenting the meaning of a lyric.

Dreams Of Flying, Mann’s eighth album, is an overlooked gem of 2020, and a great demonstration of her willingness to explore profound emotional depths.

The Blues Today
Look Inside