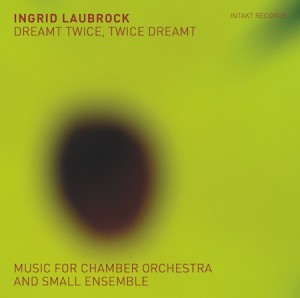 Saxophonist Ingrid Laubrock possesses one of the most fetchingly original free-improv styles out there—throaty, gutsy, bravely lyrical­—but recently, her composing and arranging have proven as engaging as her soloing. On Dreamt Twice, Twice Dreamt, Laubrock delves into emotional and psychological territory inspired by dreams and the transitional state between dreaming and waking, which takes in the disjunction of the night world, but also its cosmic absurdity.

Two ensembles—one large, one small—each play the project’s five pieces (in different order), but the large-ensemble versions are in no way rearrangements of the small-group takes; they are reimaginings, Laubrock says, of the same state of mind. The small-group version of “Down The Mountain, Down The Mountain,” for example, creates a mysterious aura with the twinkling microtonal intervals of Cory Smythe’s keyboard, while the large-ensemble treatment goes to a similarly tenuous place, but by using three different conductors simultaneously, in different time feels.

Timbral contrasts are polar. At one extreme lies the nightmare of Sam Pluta’s electronics escapade on “Dreamt Twice” with the large ensemble; at the other is Adam Matlock’s accordion dancing through “Down The Mountain, Down The Mountain” with the small group.

Laubrock’s variety and intricacy would be irrelevant if the music were not so continuously creative, dramatically surprising and sometimes even suspenseful in an almost Wagnerian manner.