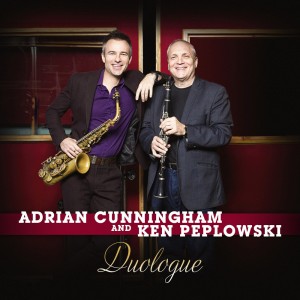 A co-leader project often is an opportunity to hear an old favorite in a new context—and perhaps to discover a new favorite musician. Such is the case with Duologue, icon Ken Peplowski’s album with fellow clarinetist Adrian Cunningham, an Australian native now based in New York who has collaborated with other acclaimed bandleaders, including trombonist Wycliffe Gordon and bassist Vince Giordano.

But the title of this excellent straightahead disc is somewhat misleading because the project involves a flexible, collaborative quintet, and the other three band members made essential contributions, adding one composition apiece to the recording. Acrobatic pianist Renee Rosnes gave this program “Jimmy Up Jimmy Down,” a gem she composed for saxophone legend Jimmy Heath. Bassist Martin Wind offered “Looking Back,” which adds a supremely memorable melody to a program filled with them. Gregarious drummer Matt Wilson supplied “Sonic Garden,” an avant-leaning piece that demonstrates how musical elements from Earth can meld well with those from Saturn. The co-leaders’ shared affinity for Brazilian tunes is evident: The band transforms Pixinguinha’s “Carinhoso” into a brilliant flute showcase for Cunningham, while Rosnes and Peplowski’s duo reading of Antonio Carlos Jobim’s “Luiza” illustrates why the clarinet master is invited to perform at festivals around the globe.

Elsewhere on this 12-track album, Cunningham and Peplowski offer authoritative dual-clarinet segments, particularly on the buoyant “Dois Grandes Gringos.” (Other woodwinds factored into the recording sessions as well, with the co-leaders contributing tenor saxophone and bass clarinet.) This album’s smile-inducing renditions of Duke Ellington’s “I’m Just A Lucky So And So” and Fats Waller’s “Alligator Crawl” will be catnip for fans of classic jazz. Additionally, this project showcases Cunningham’s sense of humor, not only in the song title of his “Mozart After A Few Beers,” but also in his liner notes essay: “Ken’s idea to record the album entirely [with the musicians] drumming on reclaimed Tupperware was suggested, and put aside … as was his idea of having us play underwater, with only the bubbles of air recorded as they hit the surface. (Preliminary bathtub tests proved unsuccessful.)”

All jokes aside, this album is terrifically successful.